Designed for the competitive athlete.

The human liver is considered by many to be the most crucial organ. It is responsible for cleansing , protein synthesis, biochemical production, glycogen storage and it even plays a major role in metabolism.

A very minor reduction in function can result in less than optimal performance. A wide range of products out there can impair liver function, some rather dramatically. Alcohol, pharmaceutical or recreational drugs, aflatoxins and even common over-the-counter drugs such as acetaminophen in higher doses can tax the liver.

ALLMAX Pro-Competition Series Liver D-TOX is a potent combination of clinically proven herbal extracts in their most pure and potent form along with powerful Vitamin Antioxidants such as Vitamins C & E and Selenium. NAC (N-Acetyl-Cysteine) is so potent that it is used in cases of Liver Toxicity due to Acetaminophen.

The Milk Thistle Extract (MTE) that we have sourced is not only standardized for 80% Silymarin, but also standardized for the lesser known, but highly potent 30% Silybin content. MTE is widely known for its proven ability to reduce liver hepatotoxins and is often employed to ensure a return to a cleansed state.

ALLMAX has sourced a 95% pure Curcumin Extract renowned for its potent detoxification and antioxidation functions. In animal studies, Curcumin has been shown to attenuate liver injury due to ethanol, iron overdose and carbon tetrachloride and even showed a trend toward reversing cirrhosis. Artichoke Extract at 5% Cynarin has been included for its hepaprotective function. Katuka Extract has a centuries-long tradition in Ayurvedic medicine as a liver tonic.

As athletes, we put our livers through a lot and depend heavily on it for everything from protein digestion to blood toxin cleansing. If you want to perform at the highest levels, you owe it to yourself to do a 21-day Liver D-TOX. 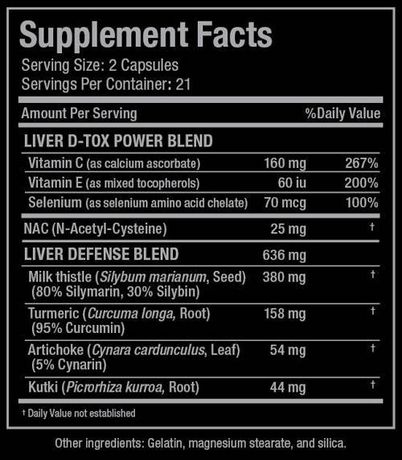